I’m playing in the six-day schedule, which involves two games a day for three days, after which all schedules merge and the entire field is in one section.  Because I wanted – just once! – to experience a leisurely tournament with one round a day, like those in Europe, I took two strategic byes in rounds 2 and 6 and only have to slog through a doubleheader once.  (Today!  More on that tomorrow.)  So I had 0.5/2 going into round 3, and this was my game.

Roger is the Iowa Delegate, and this is his 27th US Open.  I found a few of his games in the database and saw that he favored Alekhine’s Defense.  So, having watched some of John Watson’s recent videos on the subject at chessclub.com, I went into the game feeling well prepared.

Roger, truth be told, was kind and made things a little easier on me than he needed to.  Still, after his opening infelicity, he played well and forced me to be accurate.  This is the result.

Attentive readers may know that I study with John Watson.  He also won his game (in rd 5 of the traditional section) in fine style, although, in typical Watsonian modesty, he was quick to point out that his opponent had outplayed him early on.  One of the things I like most about John is his generosity.  Here’s a rather famous IM, author of 20+ books, internet chess personality, etc., and he spent at least 45 minutes in the skittles room looking deeply at his game with his opponent.  As you can see, his presence in the room did not go unnoticed… 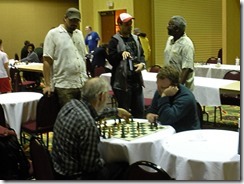