This review has been printed in the February 2016 issue of Chess Life.  A penultimate (and unedited) version of the review is reproduced here.  My thanks to the good folks at Chess Life for allowing me to do so.

How important is it to study tactics? Are they the royal road to chess excellence? I usually avoid debates on this topic in Internet forums, as they never seem to lead anywhere good, but a recent exchange on the Reddit Chess sub-forum prompted me to revisit the question.

Responding to a topic titled “Why do people stress tactics so much,” IM and chess.com head-honcho Danny Rensch reasoned as follows: while he himself was trained in the ‘Russian’ style, with a thorough grounding in positional play and endgames, he could see why some stress tactics so highly. “Tactics eventually decide every game. No matter what. At every level.” Rensch now believes that “teaching tactics first and foremost… is a good idea so that [his] students can start winning games.”

Intensive tactical study is doubtless necessary for chess improvement. Note, however, how Rensch immediately qualifies his statement: “…[w]ith balance of course.” Because tactics decide games, they can lead to more wins and increased enjoyment. Players who win are more likely to stick around long enough to learn the “advanced planning and strategical principles” that “govern who gets good tactics.”

Reading all of this, I was reminded of the famed lament of Rudolf Spielmann, a great attacking player from the early 20th century. “I can see combinations as well as Alekhine,” he said, “but I cannot get to the same positions.” This, in a nutshell, is the problem with the tactics-only approach. The tactician always has a puncher’s chance, but if your opponent hangs no pieces or mates, the only way to make use of your tactical prowess is to play into a position where the tactics exist.

There are plenty of primers of positional chess around, with Grooten’s Chess Strategy for Club Players, Silman’s Reassess Your Chess and Stean’s Simple Chess being some of my favorites. A new book from New in Chess represents a slightly different approach to the problem of getting good positions (and defending bad ones).

Alexander Panchenko was a leading Soviet coach, on par with Chebanenko, Kart, Lukin and perhaps even Dvoretsky. If he is known to an American audience, it is for his two-volume endgame manual The Theory and Practice of Chess Endings. His new book, Mastering Chess Middlegames: Lectures from the All-Russian School of Grandmasters, is (like the endgame volumes) rooted in his lectures at the “Panchenko school.”

Mastering Chess Middlegames is not a textbook, despite its being drawn from Panchenko’s lecture notes. It is an inspirational set of examples that illustrate common middlegame themes and tasks – attack, defense and prophylaxis, realizing an advantage, playing equal positions, etc. – along with typical play in important material configurations. Each chapter concludes with sets of positions for solving and playing out with a training partner.

This approach to improvement – the study of illustrative examples rounded out by practical experience – is much the same as found in more advanced books by Aagaard or Dvoretsky. In contrast to those works, probably best suited for experts and above, Panchenko’s book can be profitably read by ambitious class players.

Grandmasters Rublevsky and Timofeev note in their contributions to Panchenko’s book the centrality of defense in his teaching. Three chapters, nearly a quarter of the book, are devoted to this theme. In Chapter 2, ‘Defense,’ Panchenko provides 47 lightly annotated positions, some famous and some less so, arranged under a number of subheadings. 15 positions are given for solving, and 6 for playing out. Here is one of the positions to solve. Can White (on the move) save the game? 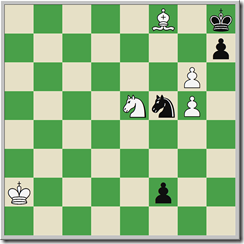 Mastering Chess Middlegames is a practical guide to navigating standard middlegame situations and themes with an emphasis on active learning. Reading it will not replace or undercut the need for tactical study. After working through its pages, however, and honing your skills in solving typical middlegame problems, you might fulfill Spielmann’s dream and find yourself in the types of positions from which combinations flow.