This review has been printed in the June 2017 issue of Chess Life.  A penultimate (and unedited) version of the review is reproduced here. Minor differences exist between this and the printed version. My thanks to the good folks at Chess Life for allowing me to do so.

Among Caïssa’s many servants, few are as devoted as is Jay Bonin. The International Master has been a fixture on the New York chess scene for over 40 years, and hardly a day goes by that Bonin is not playing at one of the Metro Area’s many tournaments. He has contested an astounding 16,885 rated games (as of 4/2/17, and across all time controls) since US Chess started keeping electronic records in 1991.

I came of age playing chess around New York, and I vividly remember encountering Bonin at one of my first tournaments at the Nassau Chess Club. That a titled player, someone one step away from being a Grandmaster, was right there in the flesh… it was astounding. Somehow I worked up the courage to walk up and ask him if he could recommend a book on bishop endings – how random! – and, looking back, the adult me can recognize the weary smirk with which he answered that gawky, sweaty teen.

It is not hyperbole to say that Jay Bonin is a legend of New York chess. So when I heard that there would be a book about Bonin, I was excited. There are so many great American players (particularly of Bonin’s generation) whose stories are never told, whose best games never make it to the databases. At least one of them would be spared that fate.

Active Pieces: Practical Advice from America’s Most Relentless Tournament Player is an annotated collection of 130 of Bonin’s games. While the stories and ideas are Bonin’s, the words themselves belong to co-author Greg Keener. This is Keener’s second such effort, having co-written The Czech Benoni in Action with another New York stalwart, FM Asa Hoffman.

Much of Bonin’s style seems to derive from the rigors of incessant tournament play. He is primarily a grinder, someone comfortable playing dry, technical positions to the bitter end against weaker opponents. We see this most clearly in chapters 4-7. Chapter 4 consists of games in Bonin’s pet openings, which often lead to quick queen trades and deceptively quiet situations. Chapters 5-6 show us how he handles sterile positions, using small imbalances to maximize winning chances. And Chapter 7 contains multiple examples of his counterpunching skills.

One of the very nice things about Active Pieces is the sparse, stream-of-consciousness nature of some of the annotations. It’s rare that we get something approaching unfiltered access to a strong player’s in-game thoughts, and I think there’s great value in seeing how Bonin goes about conjuring victories from equal positions.

Perhaps that’s why I was so disappointed by the multiple analytical errors I found when playing through the games. I’m not talking about a swing from +0.4 to -0.3 pawns, which would be forgivable. The text glides over major blunders without comment, and there are notes containing deeply flawed evaluations and analysis. Here’s one particularly egregious example. 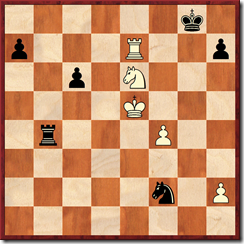 In Bonin-Shchukin (Philadelphia, 2000) White has just played 38.Ne6, and Bonin and Keener write: “Decisive. The f-pawn will also have a say in matters.” (112) Black is indeed lost after 38. ..h5, but 38. ..Rb5+ is drawn. Some might argue that the draw is difficult, that it might be hard to see over-the-board, and I’ll willingly grant both claims. The fact remains that the annotation is fundamentally wrong.

Active Pieces is sloppy in other ways. The proofreading appears to have been lax, as there are incorrect move numbers in notes and inconsistent attribution of place in game headers (100). Bonin-Remlinger took place in Chicago, not New York, in 1992 (108), and Foxwoods is not in New York but in Connecticut (179). I also thought that the frequent repetition of games from chapters 1-8 in chapter 9, a set of 100 tactics to solve from Bonin’s games, deserved at least some kind of explanation.

Active Pieces could have been a fitting tribute to a man who has given much of his life to our game. Instead it feels like a first draft of that book. New York players will love it, but those concerned with accuracy may want to wait for a second and corrected edition.