Reflections on My Profession is the second volume in Mark Dvoretsky’s autobiographical diptych. In my review of the first book in the series, titled Profession: Chess Coach, I described it as a “memoir of his life in chess.” Reflections on My Profession is a true companion volume to Profession: Chess Coach. The bulk of the book is devoted to explaining – sometimes polemically – what Dvoretsky takes to be best practices for chess coaching and improvement. Reading the two together, we get a more holistic picture of Dvoretsky as a man and as a trainer than we would by reading either by themselves.

Reflections on My Profession consists of a series of essays, with most having been published elsewhere and reprinted here in updated form. There are three main divisions: “Competitions,” dealing with over-the-board play by him or his students; “Chess Literature: What and How to Read,” where Dvoretsky investigates (and in some cases, castigates) recent articles and books of interest; and “Training Mastery,” the bulk of the book, where Dvoretsky lays out the basic tenets of his training methods.

The first section of the book is mildly interesting, but mainly for the analysis. The second and the third sections are, in my opinion, of much greater value. Accordingly I will devote some lines to these two sections before moving on.

In his discussion of chess literature, Dvoretsky points us towards good annotators (Matthew Sadler and Grigory Sanakoev) and calls out charlatans (Hans Berliner). His preface to the Russian edition of John Nunn’s Secrets of Practical Chess is basically a list of book recommendations, and aspiring masters would do well to work their way through his choices.

In an aside, Dvoretsky argues (144) that classic books should be brought back into print, but with a twist. He describes the need for introducing a contemporary co-author who would correct analytical errors and introduce additional material. I suspect that it is not a coincidence that one of his recommended books, Spielmann’s The Art of Sacrifice in Chess, has just been republished by Russell with Karsten Müller playing the co-author’s role. Müller’s additions appear in blue, and he has also added what amounts to another book’s worth of material to the text. It looks promising.

The third section of Reflections on My Profession, devoted to chess training, consists of two main types of chapters. There are ‘practical’ chapters, where Dvoretsky offers readers problems to solve from his famed card index, and there are ‘theoretical’ chapters where he explains the role of the trainer and best practices for improvement.

Perhaps the clearest statement of his vision for chess training comes in the first chapter of this section, “Philosophy of Training Work.” Trainers must work to develop player’s strengths while overcoming their weaknesses. They do so by offering their pupils clear examples or ‘chess images’ for study, and also by providing them problems to solve. Dvoretsky is clear in his belief that chess improvement comes through practice. A good trainer provides her pupils the kinds of exercises that will burnish their strengths and mend their flaws, and it is only through consistent solving of problems that players can hope to obtain better results.

Dvoretsky describes the selection of appropriate problems for solving in “Solve for Yourself!” Most of his discussion, while interesting on an intellectual level, is of little use for the majority of readers. We aren’t strong enough to discern our own weaknesses, and our understanding limits our ability to create material for self-training. The problems used as examples can, however, be salvaged for training purposes. Recently I used five of them to good effect in a session with our Denker representative. Here’s one of them.

“White is up a rook and a pawn, but how can he defend himself from being mated?”

Dvoretsky’s path to chess improvement is not easy. If we leave aside the fact that most of us recoil from the kind of active learning he prescribes, there is still the matter of finding (a) appropriate and (b) sufficient positions. In a previous review I had lamented the fact that for all of his output, Dvoretsky had yet to publish a book of problems specifically for solving. An ambitious reader could mine Reflections on My Profession for suitable positions, as I did with our Denker rep, or she could turn to the second book under review in this essay.

If Dvoretsky is known for one concept or insight, it is certainly that of prophylaxis. As he defines it in Secrets of Positional Play, prophylactic thinking is “the habit of constantly asking yourself what the opponent wants to do, what he would play if it were him to move, the ability to find an answer to this question and to take account of it in the process of coming to a decision.” (28) Recognizing Your Opponents Resources is, in a nutshell, a collection of problems for solving that all revolve around prophylaxis.

There are four chapters in this book. Each begins with a small lesson on the chapter’s theme, and this is followed by a batch of positions for solving along with their solutions. “Pay Attention to Your Opponent’s Resources” has 180 problems. “The Process of Elimination” has 106. “Traps” has 36, and “Prophylactic Thinking” has 154. (The polyglots among you will note that the chapter titles correspond rather well with the German titles listed above.) It is basically the puzzle book that Dvoretsky never published, until now.

In each chapter the problems tend to run from easier to harder, where ‘easy’ and ‘hard’ should be understood as being relative to Dvoretsky’s very high standards. Here are two from the chapter on “Prophylatic Thinking.” The first is the 7th in the problem set, while the second is the 152nd. White is to move in both cases. 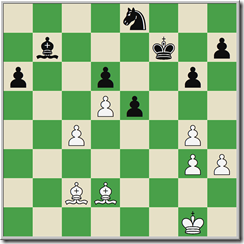 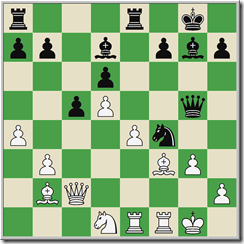 (Solutions for both problems)

For Friends and Colleagues: Reflections on My Profession is something of a niche publication, and coaches, trainers and Dvoretsky acolytes will make up its main readership. Every 2000+ player looking for training material should pick up Recognizing Your Opponent’s Resources. It’s hard to think of a book that provides the strong player more bang for his improvement buck, and it’s hard to think of another book that treats its topic so well.