This review has been printed in the December 2019 issue of Chess Life.  A penultimate (and unedited) version of the review is reproduced here. Minor differences exist between this and the printed version. My thanks to the good folks at Chess Life for allowing me to do so.

“The past is never dead. It’s not even past.” — William Faulkner

Anniversaries are a time for celebration, for looking at the great accomplishments of the past, and for understanding how they might weave their way into the

So it is with the 80th Anniversary of the US Chess Federation, an organization that has grown from a membership base of 533 in the middle of World War II (1943) to the nearly 100,000 members we boast today. Chess Life, along with its predecessor Chess Review, stands as a chronicle of  American chess in those eighty years, and the digitization project announced at the 2019 Delegates Meeting is the best anniversary present that US Chess could possibly have given its members.

I have spent more than a few hours perusing this archive, which should soon be available to US Chess members (if it is not already). And I am struck by the tremendous variety of materials found there, and how they differ from what we find in today’s chess magazines.

While the analysis itself cannot be expected to stand the test of time, there is much in these issues that retains value. The contemporaneous reporting of big events have not lost their vitality. Endgame columns by Edmar Mednis and Pal Benko are still vital sources of knowledge, even if some of the particulars are wrong. And the annotations… one finds a treasure trove of analysis from some of the world’s leading players, now free for anyone to download.

Take, for instance, the May 1974 issue of Chess Life. Svetovar Gligoric analyzes the famous Karpov-Uhlmann “a-file game” (Nice, 1974) over three pages, including a massive opening theoretical. Paul Keres annotates games from the Karpov-Spassky match. Bent Larsen writes about Las Palmas 1974, Reshevsky discusses two of his games, and Laszlo Szabo turns his eye to three games from recent competitions. Couple this with Mednis’ excellent work on the endgame and “Benko’s Bafflers,” and you begin to see what a massive resource US Chess has given the world.

Why am I taking so much time to talk about magazines? Aren’t they obsolete in the perpetual now of YouTube and Stockfish? Absolutely not. While the chess media landscape has changed in the Internet age, with constant livestreams of big events, and websites like Chess Life Online providing quick, solid reporting, perspective and context can be hard to pin down in real-time. That’s where publications like Chess Life are so valuable. They distill and memorialize the ephemeral, standing as a publication of record for future generations.

More: besides being a pleasant diversion, serious study of chess history and analysis is essential to ongoing improvement. When someone works through well-annotated games as found in Chess Life, she learns how openings evolved, how initiative moves into attack and how mini-plans are woven into long-term advantages. All of this is precisely what an engine or tactics trainer cannot teach you.

I was reminded of this when listening to GM Ramesh RB talk about his life and career on the Perpetual Chess Podcast. He laments the obsession of young players with engines and databases, and argues that it is critical for his students to study books, particularly games collections of great players. In doing so, they learn the history of the game, but also pick up key ideas about strategy and technique.

And it’s not just coaches who understand this. Fabiano Caruana showed his historical knowledge at the recent FIDE Chess.com Grand Swiss, dredging up an antiquated opening idea in the Rossolimo Sicilian to defeat Vladimir Fedoseev. Awonder Liang described the Yermolinsky-Ehlvest game at the 2019 US Senior Championship as “90s era chess”[1] where play is less concrete but more thematic, thereby exhibiting his grounding in chess history… and perhaps a bit of the impudence of youth!

The new Chess Life digital archive is one source for this kind of material. Another is the tried and true chess book. Amidst the avalanche of opening books and self-help tomes, publishers have also put out some excellent historical and biographical titles in recent years. When I look back at the best books that have passed through my mailbox, many are of this variety, but I was particularly impressed with one in particular.

The “Chess Classics” series at Quality Chess has included some important titles, including Python Strategy, an annotated collection of Petrosian’s games, and The Science of Strategy, a textbook of sorts from Alexander Kotov. The newest book in the lineup is The Nemesis: Geller’s Greatest Games, a translation of a 2017 Russian collection of Efim Geller’s annotated games. It is excellent.

Geller was one of those players who, while not quite at the level of the World Champions, wasn’t far off their standard. Tactically gifted and technically skilled, Geller was particularly valued by the Soviets as an opening theoretician. He created numerous ideas in the Sicilian and King’s Indian – Botvinnik famously said that “before Geller, we did not understand the King’s Indian” – and seconded Spassky, Karpov, and Kasparov in World Championship play. Perhaps his only weaknesses were perfectionism, leading to time trouble, and a (relative) propensity for blunders.

The Nemesis contains 135 games annotated by Geller’s own hand, organized chronologically with the exception of two appendices featuring his brilliancy prizes and best adjourned endings. 86 of the games have previously appeared in English in The Application of Chess Theory (Cadogan, 1984), but the new edition has a number of advantages over its predecessor.[2] Two are worth mentioning.

The Application of Chess Theory is organized by opening, while games in The Nemesis occur in the order they were played. I prefer the latter, as it allows readers to get a sense of Geller’s growth from tactical hacker to all-around player. This may simply be personal preference, but it is not hard to see Geller’s stylistic progression as one works chronologically through his games.

I had not seen much of Geller’s writing before I began reading The Nemesis, but I was pleasantly surprised by what I found. His annotations are matter-of-fact and sometimes a bit sharp, and he does a fine job explaining the key features of positions without droning on. The analysis is also well-tuned, with lines going deeply enough when it is necessary, but without overwhelming readers.

The games themselves are fantastic. Genna Sosenko’s comment in Russian Silhouettes –  “a lot of what seems obvious and straightforward in present-day chess is based on positions and principles which were developed by the best players and analysts of the 50s, 60s, and 70s. And one of the most significant of these was Efim Geller.”[3] – is lent credence in these pages, and I suspect that readers will find much in Geller’s games that can be applied in their own

The Nemesis also properly handles the problem of how to introduce computer analysis into pre-computer annotations. Engine-assisted improvements by IM Max Notkin, the editor of the Russian edition, appear in italics in the text tastefully and 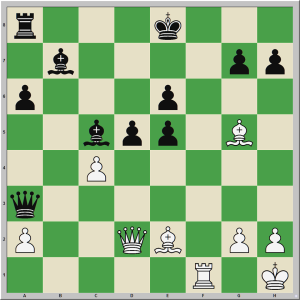 Here, after more than twenty minutes thought, Fischer played the incorrect 20.Bg4. Geller writes: “Condemning him for it is easy; avoiding the error is much more difficult. Objectively speaking, Black’s king should hardly be able to survive under fire from four white pieces, but finding the route to victory over-the-board is not so simple: there are too many continuations to analyse.”[4] (225) Play continued 20. … dxc4 21. Bxe6 Qd3 22. Qe1 Be4! and Black won shortly thereafter.

Geller spends two full pages unpacking the three alternatives Fischer had to consider – 20.Rf3, 20.Bd1, and 20.Qc2 – deciding that White’s attack would only work with the final two moves. The computer shows that just 20. Qc2 gives an advantage, as Black survives after 20. Bd1 Kd7 21. Rf7+ Kc6. But what about 20. Bf3, putting more pressure on the center and asking Black to make a productive

I stumbled upon this idea when checking Geller and Notkin’s notes with a prototype of the new Fat Fritz neural-net engine. Fat Fritz, in contrast to both Stockfish and Leela, thinks that 20. Bf3 is the best move in the position by a large margin. Together we worked out the following ideas, a much fuller version of which appears in this issue’s accompanying pgn file at uschess.org.

Purdy once said that the best way to improve was to “play against champions”[5] by studying their games and testing our ideas against their moves and analysis. In doing so we renew the conversation with the past, conjuring the spirits of the game’s greats and bringing them into discussion with the present and future.

The Nemesis provides a model for how we might understand that dialogue today, including silicon-enhanced insights without harming or undermining Geller’s particular genius. That dialogue extends indefinitely, as Fat Fritz and I learned in the lines above. Perhaps some of my readers will investigate the new Chess Life digital archive to see what kind of conversations they might find there.

[1] See the STLCC live coverage of the 7th Round of the U.S. Senior and Junior Championships (at about 2:41). Thanks to Jeremy Kane and Tatev Abrahamyan for helping me find this via Twitter! https://www.youtube.com/watch?v=VWRkUiYTTO8

[2] The inverse of the in-text statement is that 14 games in The Application of Chess Theory are not to be found in The Nemesis. The explanation, per the publishers at their blog, is that only Russian-language sources were included in the 2017 Russian edition, thereby undercutting IM Notkin’s claims in the Preface to this being Geller’s “complete works.”

[4] As an aside, Geller includes a fascinating observation. “The characterization of Fischer that I rightly relied on was borne out at this very juncture: in unfamiliar sharp positions he loses his bearings.” (ibid.)